Hi! Welcome back to my blog!

This past weekend I headed down to New York City to stay with my friends who are currently living there for the month while we’re on winter break! I had so much fun exploring the city and seeing new parts of it I had never been to before, and I wanted to share with you everything I did. This post is going to be pretty in-depth and long, but if you’re heading to NYC at some point and want some recs or are just curious to see what I got up to, keep reading!

Mitchell and I both planned to visit friends in the city the same weekend so we could travel together! We took the train to New York and got to Penn Station by 10:30 am. The first thing we did was head to Central Park to explore for a bit! Then we went to Times Square to walk around. 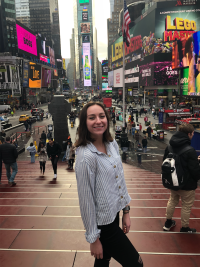 I always hated Times Square because I went once during Christmastime and it was SO CROWDED but it was much less crazy this time of year. After Times Square we walked to Rockefeller Center. We stopped and watched the people ice skating and peeked into FAO Schwarz. Then we headed into 30 Rock for an NBC Studios tour! I highly recommend this tour! Tickets weren’t too expensive (they were $30) and we got to see studios for so many shows which was super cool! We even got to film our own talk show segment which was equally fun and cringe-worthy lol.

After that, we headed to meet up with my two friends that I was going to stay with for the weekend.

We went to Washington Square Park and took some pictures by the arch. It was during golden hour and the pictures came out so cute! Then we went to DŌ and got edible cookie dough which was so yummy! I got the brookie flavor and it was so good. Then Mitchell parted ways to head to meet his friends and my and my 2 friends went back to their apartment, stopping to pick up some slices of pizza to eat later for dinner.

Their apartment was in the lower east side of Manhattan, so that night we went out in that area. We went to a bar called Pianos which was the highest-rated bar in the area. We had a fun night out dancing!

Saturday my friend Hannah and I did LOTS of exploring. We walked so much, I took around 20,000 steps that day! The first thing we did was head to a bagel place around the corner from the apartment and man it was so good! New York bagels really are all that they’re hyped up to be. We first walked to Essex Market to see what it was and did a little lap through it. It was only around 11am so we didn’t get anything but there were lots of food vendors and everything looked and smelled so good. We then made a pit stop at The Pickle Guys where Hannah had heard of before. If you’re a pickle fan, you will love this place. They had pickled pretty much every vegetable you could think of! Pickles were only $1 and we each got one, plus the guy working there gave us a 3rd for free which was nice! I’m seriously not kidding when I say that it was the best pickle I’ve ever had.

Then we walked through China Town, which was somehow more crowded than any other part of Manhattan, and made it to Little Italy!

The area is only about 2 blocks but it was still so exciting to be there haha! We went to Amici for lunch and it was so good. I got the Penne Alla Vodka and it was amazing, as expected. After lunch, we stopped by Caffe Palermo (home of the Cannoli King) and got, obviously, cannolis for dessert. Little Italy done right!

Then we headed to the Brooklyn Bridge to walk on it and take some pictures. We only walked about halfway because we didn’t actually have any plans to go into Brooklyn but the bridge was pretty and I had never seen it before! Heads up if you head there though, it was quite crowded but still worth it!

We then had to walk back to her apartment which was around a half an hour walk. We were so exhausted so we spent a few hours relaxing in her apartment and then found a local diner for dinner.

After dinner, our other friend, Rebekah, came back to the apartment from a day out with her friend and we all got dressed up and went out to a pub around the corner for the apartment! Saturday was definitely the busiest day of the weekend, but we got to see (and eat!) a lot of great stuff!

Sunday was my last day in the city! Mitchell and my train didn’t leave until 7:30pm so we had pretty much an entire day to do things. Hannah, Rebekah and I headed over to the High Line and walked across that until we came to the Vessel. We didn’t make reservations to go on it but it was still really cool to look at. 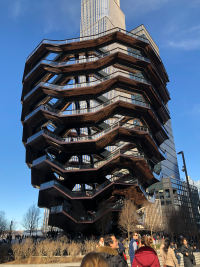 We took some pictures and then walked back the other way across the High Line. For lunch, we went to Chelsea Market! There were so many options for lunch and dessert. Following lunch, we went to the West Village and made a pit stop at the Friends apartment building.

It was really cute to see! Then we went back towards the Lower East Side to hang out for a little bit before I met up with Mitchell and we took the train back home to Rhode Island.

So that’s everything I did this weekend! We pretty much fit in a week’s worth of activities into 3 days but it was so much fun and exciting. Have you ever been to NYC? What is your favorite thing to do there? Let me know in a comment! Also, if you liked this post, be sure to click here to subscribe to emails and follow me on Instagram @successandselfcare!

Hi, I’m Mackenzie! I created this blog to help you start living a life you love. Success and Self-Care is your one stop shop for all things productivity, wellness, and personal development.